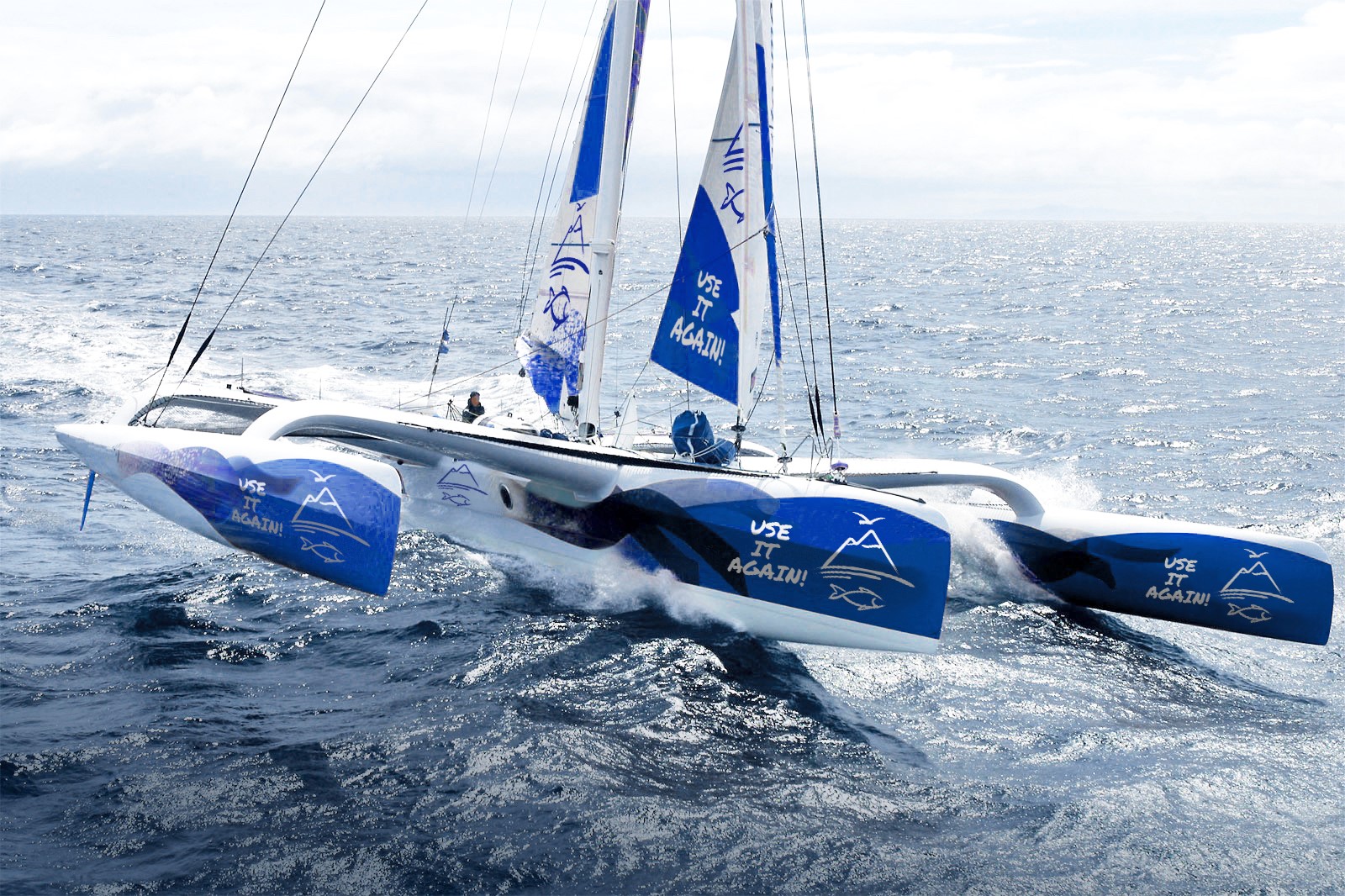 By supporting the project symbolized by the “Use It Again!” trimaran for the 2018 Route du Rhum, Oodrive is strengthening its commitment to social and environmental responsibility

Combination of circular economy and performance

Oodrive, the trusted partner for sensitive data management, has announced its support for Romain Pilliard, the skipper at the helm of the “Use It Again! ” project, which adopts a global approach to the circular economy*. In doing so, Oodrive has joined the skipper’s “fan club”, which is jumping aboard the former vessel of the famous British yachtswoman, Ellen Mc Arthur, who broke the world record for single-handed circumnavigation of the world in 2005. Romain Pilliard’s ambition is to compete in the Route du Rhum (St Malo – Guadeloupe, Nov. 2018) in the Ultime category.

“We have refurbished Ellen Mc Arthur’s giant trimaran using mainly recycled materials. It’s now ready to sail and is high-performing. In addition, the energy required for proper operation of its navigation and communication tools is 100% natural thanks to using solar panels, wind-power and hydroelectric generators”, affirms Romain Pilliard, a skipper and entrepreneur.

The “Use It Again!” trimaran project is intended to provide a model of ecodesign. The objective is to show that it is possible to meet the highest standards of offshore racing in a project based on concepts of the circular economy.

Besides the nautical challenge, Oodrive identifies with the values often shared by the skippers, such as pushing yourself to the limit, a taste for adventure and top performance. Oodrive’s organizational model is also in harmony with the sailor’s universe, where agility is a key factor for successful decision-making when confronted with the contingencies of the race.

An initiative acclaimed by the government

This event supporting the circular economy is widely acclaimed by the French government which revealed, in late April 2018, a road map to promote public and private initiatives advocating sustainable development and ecodesign.

One of Romain Pilliard’s main ambitions, with the support of the Ministry for an Ecological Transition with Social Solidarity, is to make the general public aware of the importance of sustainable development, both in France and abroad. Its objectives are to make people understand that is urgently necessary to change their consumer habits and ways of thinking and to show that an effective project can become part of the circular economy.

A meaningful project for Oodrive, and for its clients and partners!

Oodrive’s decision to join this project is in keeping with its daily routines to reduce its ecological footprint. The company is constantly on the lookout for initiatives to minimize its environmental impact, such as improving the energy efficiency of its buildings, going paperless in internal communications, selecting environmentally aware suppliers, eliminating plastic cups and plates, selective sorting and recycling of waste via a certified entity, the choice of environmentally friendly equipment, etc.

“Every day, we strive to provide our teams with a working environment more favorable to self-realization. We encourage training and diversity, and we support all meaningful internal initiatives in line with our policy of social and environmental responsibility. Regarding sustainable development, we are setting up specific campaigns to reduce our ecological footprint. The “Use It Again!” project, based on the circular economy, is an opportunity for us to become even more aware of environmental issues”, affirmed Jean-Louis Amice, Oodrive’s Chief Human Resources Officer.

The “Use It Again!” partnership will also be an opportunity for Oodrive to invite clients, employees and preferred partners to train themselves with Romain Pilliard aboard the trimaran next September in Brittany. Pursuant to that partnership, Oodrive is also going to sponsor the 11th TOUR DE BELLE-ILE, France’s biggest sailing race, bringing together over 500 sailboats, initiated in 2008 by Romain Pilliard and his wife and partner, Aurélie.

*The circular economy is an economic model aimed at producing goods and services in a sustainable manner by minimizing the consumption and waste of resources (raw materials, water and energy) as well as waste production. The goal is to break free from the linear economic model (mine, manufacture, consume and discard) in favor of a “circular” model. With that in mind, the government has become involved with its Circular Economy Roadmap.

Source : Ministry for an Ecological Transition with Social Solidarity

Born in Paris, Romain discovered sailing with his family in Brittany, and the regatta while studying business administration at ESSEC BBA. After that, he took part in the sailing version of the Tour de France as a crew member, particularly with the national team for the America’s Cup.
Following his first professional experience, Romain dived into offshore racing and participated in the French solo sailing championship known as Solitaire du Figaro in 2000 and 2001. He then sailed as a crew member on IMOCA yachts, notably with Ellen Mc Arthur, and aboard the multihull yachts ORMA 60, MOD 70, and so on. Together with his wife Aurélie, he created the sports marketing agency EOL (www.eol-sports.com) specialized in sailing.